Saint Mary’s Priory, Tallaght, was founded in 1855 and the Studium (House of Studies) of the Irish Dominican Province was established there. It inaugurated a long tradition of teaching, especially in philosophy and theology. The Studium was made an open Studium Generale of the Dominican Order in 1935. Since 1971, when it was affiliated to the Faculty of Theology of the Pontifical University of Saint Thomas in Rome (Angelicum), the Studium has offered a full-time, four-year theology degree course (STB) accredited by that university. From 1993 until 2001 a part-time (two years, two evenings per week) diploma in theology course was offered.

By decision of the Provincial Chapter, the Studium of the Irish Province was relocated to Saint Saviour’s Priory, Dublin in 2000. The continuity of studies in Tallaght was ensured by the establishment there of a Centre of Studies which would assume responsibility for and develop the diploma course and the adult education courses that the Studium had created. In keeping with the Province’s policy of developing collaborative ministry, the Centre of Studies incorporated itself in a collaborative institution, which is the Priory Institute.

In 2004, The Priory Institute entered into a partnership arrangement with the University of Wales, Lampeter (latterly the University of Wales Trinity Saint David) and accreditation for an honours degree programme in theology was secured.  Several academic awards ceremonies have been held in Tallaght since 2005, at which certificates and diplomas of higher education in theology from the University of Wales, Lampeter have been presented to students who had successfully completed their studies and were exiting at a specific level of achievement.  In November 2010, the first graduates – 37 in all – were conferred with a Bachelor of Theology (Honours) degree qualification, along with others who were exiting at certificate or diploma levels.  This historic occasion marked what might be regarded as the end of an exciting first stage in the Institute’s history.

The vast majority of our students wanted our theological programmes to be accredited by an Irish university or college, because third level institutions in Ireland were already conforming to the Bologna Declaration. By means of that our programmes would carry ECTS (European Credit Transfer System) points and be easiliy recognised within the Euroean Union and all over the world. Therefore, the Priory Institute entered into a strategic alliance with ITT Dublin (our next-door neighbours) in 2011. In 2019 ITT Dublin amalgamated with two other existing institutes of technology in the Dublin area – Dublin Institute of Technology and Institute of Technology, Blanchardstown to form Technological University Dublin to become the largest third-level institution in Ireland based on student population.

Under the current agreement, TU Dublin ensures that The Priory Institute delivers, manages and monitors its academic programmes in accordance with the quality assurance policies and practices already in existence for the suite of programmes offered by TU Dublin. Based on this exciting partnership with TU Dublin, The Priory Institute is now in a position to offer several major and minor awards programmes, including certificate, higher certificate, diploma, ordinary degree, honours degree and masters degrree programmes. All academic programmes offered by The Priory Institute today are validated by TU Dublin, which has delegated authority from QQI (Quality and Qualifications Ireland) to issue academic awards. QQI is responsible to the Irish government for maintaining the ten-level NFQ (National Framework of Qualifications).

The Dominican Order and The Priory Institute have a significant tradition in the field of scholarship and theological education.  It is expected that the strategic alliance between The Priory Institute and TU Dublin will continue to enrich each student’s learning experience, while the sharing of knowledge, expertise and resources should lead to substantial benefits for both institutions. 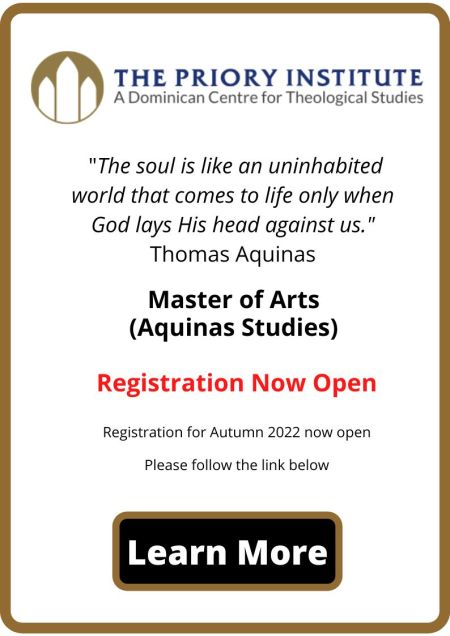 The Priory Institute response to COVID-19